The company purchased Continental Towers in a joint venture with GlenStar, the former owner of the property, which will remain as operating partner.

The upgrades will target the two-acre plaza deck, lobbies, café and amenity space. They follow several other improvements which GlenStar has been continuously adding to the property over the past five years, including building a parking garage for up to 734 vehicles, repositioning the entryway and renovating the fitness center, restrooms and corridor. According to Rubenstein, the total cost of improvements has mounted to $30 million. As a result, occupancy has increased from 55 to 90 percent, with companies such as Verizon and Panasonic signing the tenant roster.

The suburban office center was completed in 1982 at 1701 Golf Road and encompasses three buildings, which are all LEED certified to the Silver level. In addition to the office segment, the property incorporates a 22,000-square-foot health club, as well as dining and retail space. The campus spans 34 acres and it can be accessed via Interstate 90. Woodfield Mall is located within 3 miles from the property, while O’Hare International Airport is 10 miles away.

In January, Rubenstein made another important office acquisition in the Midwest, by adding the $132.7 million Precedent Office Park to its portfolio. 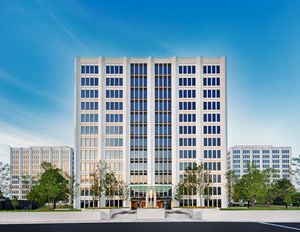