GlenStar initially acquired the property in 2013 and since then has expended approximately $30 million on capital upgrades to completely redevelop the 910,796-square-foot office complex and restore it to its former “top of market” status. With an infusion of $20 million earmarked for additional renovations, the new joint venture between Rubenstein and GlenStar plans to build upon on the prior renovations to further solidify Continental Towers as a Class A office complex.

“Our main focus as a firm is to seek out and acquire high-quality, value-add office assets in emerging markets and the Continental Towers property represents everything we typically look for in an investment,” said Brandon Huffman for Rubenstein Partners. “We believe strongly that the combination of the property’s exceptional location in suburban Northwest Chicago and our planned significant capital improvements will make this an attractive choice to office users throughout the market.”

The partnership envisions a complete overhaul of the massive, two-acre plaza deck as well as lobbies, café and amenity space. Restroom and corridor work will continue. Work is set to begin immediately.

“Having such a large outdoor space—a two-acre blank canvas—will allow us to do something very unique and special at Continental Towers,” said GlenStar principal Michael Klein. “We’re excited to watch the project progress into its next phase.”

The three-tower office complex was a premier office destination in suburban Chicago when constructed in 1981. Centered around an amenity-rich concourse whose tenants include a 22,000-square-foot health club, dining and retail amenities, the buildings sit on a 34-acre corporate campus that provides unobstructed views in all directions, easy access to the Woodfield Mall and high visibility along I-90.

GlenStar’s capital campaign, launched in 2013, included building a 734-stall parking garage and reconfiguring the overall site plan to create a more inviting, and easier to navigate, entryway. Other significant renovations included a complete rebuild of the fitness center as well as signage, restroom and corridor upgrades. As a result, occupancy jumped from 55 to 90 percent while landing high-profile tenants such as Verizon and Panasonic.

“Our partnership with Rubenstein not only ensures completion of the project, but also guarantees that Continental Towers maintains its Class A presence in the market, and is noted for being a property that caters to a top-tier tenancy,” said Klein. 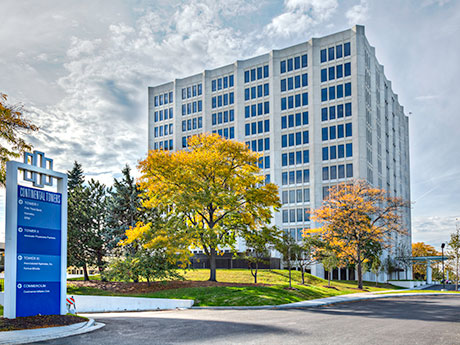