The suburbs overall may have an elevated vacancy rate, but many class A properties in select submarkets are doing quite well.

CHICAGO—Following a national trend, some suburban landlords are ready to spend considerable amounts redeveloping a select group of class A properties. GlenStar Properties has helped lead the way in the Chicago metro area, and has just launched the largest redevelopment project ever undertaken in the Northwest suburban office submarket, a $28 million capital campaign at its Schaumburg Corporate Center.

“We have every confidence in the northwest suburban office market as evidenced by our significant commitment to this redevelopment,” says Michael Klein, a GlenStar principal. “We completed a similar but smaller scale redevelopment of Continental Towers in Rolling Meadows about three years ago, and the result is a property that is currently over 90% occupied.”

GlenStar acquired the property in March 2017, marking the first time the property had changed hands since it was developed in the early 80’s. The amount paid was undisclosed, but Cook County property records show a price tag of $70,749,500.

Often considered an A- asset, GlenStar renovation program will upgrade the center to class A+ status by adding hospitality-type amenities that rival those at the most sought-after CBD properties.

Plans include the construction of:

But it’s the 17,000-square-foot glass atrium in the 1501 building, the only one of its kind in the suburbs, that sets the complex apart. GlenStar plans to make it into a true hub for all Schaumburg Corporate Center activities by creating an inviting and useable space. The developer will update the ceilings and lighting, and add new finishes, furniture, and fixtures, as well as a large video screen.

GlenStar has a track record of successfully completing similar projects. In less than two and a half years, the company took over Continental Towers in nearby Rolling Meadows, gave it a $23 million rehab, and raised the occupancy from 55% to 93%.

“The complex has great ‘bones’ and we believe once this project is complete we will have created an office environment that is unique in the suburbs,” adds Klein. “We plan to capture those tenants that want a fresh property that caters to their work/life needs.” 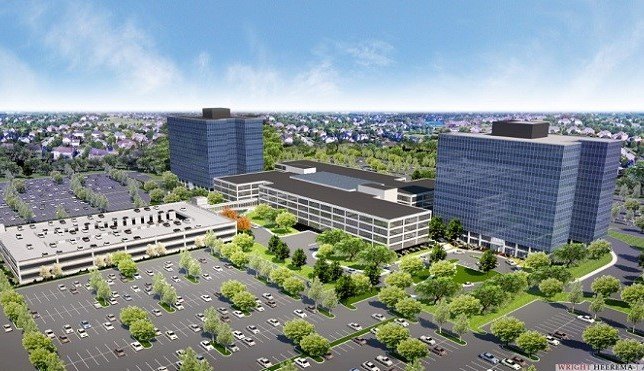