For First Time, Bannockburn Office Complex Has One Owner

GlenStar Properties is going all-in on a rehab project in the struggling north suburban office market.

Two years after teaming with Walton Street Capital to buy four of the five office buildings in the Bannockburn Lakes office complex, GlenStar bought the fifth building in hopes of marketing the revitalized campus as a whole to new tenants.

With an eye on eventually selling or refinancing the entire 524,084-square-foot complex, a GlenStar venture recently bought the three-story building at 2121 Waukegan Road from Chicago-based Ameritus Real Estate Investment Management for $6.3 million, bringing all five properties under the same ownership for the first time.

By controlling all of the buildings, GlenStar is betting it can transform the previously​ dilapidated campus into an amenity-rich destination that will help fill it, as nearly half of the complex is vacant.

“This is an office park that has a uniqueness about it,” said GlenStar Managing Principal Michael Klein, pointing to its proximity to a forest preserve and running trails near the North Branch of the Chicago River. “Very few (suburban) office complexes have that ability to provide (those amenities) because many of them are sitting next to a tollway with concrete parking garages around them. We saw this and said, ‘This could be a beautiful park.’ “

That vision comes at a trying time for office landlords in the northern suburbs, which had the second-highest vacancy rate of all Chicago submarkets at the end of the third quarter, according to data from brokerage Jones Lang LaSalle.

Klein is encouraged by the flight to quality buildings that suburban office tenants have shown in recent years, giving him reason to believe his firm can succeed by modernizing and marketing Bannockburn Lakes as a whole.

“You can provide amenities to the park as a whole instead of your three buildings or four buildings” when you package all of the buildings together, he said. “And it gives your tenants flexibility when it comes to expansion.”

Office buildings at the 30-year-old complex have had various mixes of landlords in the past with differing goals and capital structures, which has made it difficult to keep pace with large shared amenities that have become commonplace at other suburban office developments.

Some of the buildings have also been distressed: San Francisco-based Wells Fargo Bank took back three of them in a 2014 sheriff’s sale after filing a foreclosure lawsuit against their previous owner over an unpaid $50.6 million loan.

Ameritus sold the fifth building—which is about 50 percent leased with tenants including law firm Fisher & Shapiro and an office of Greenwich, Conn.-based XPO Logistics—after buying it in June for $4.2 million, over $2 million less than GlenStar paid for it. A spokesman for Ameritus could not be reached.

GlenStar, which paid $27 million in 2015 for the other four buildings, has given the campus a $10 million face-lift over the past two years with cleaned-up ponds, a bridge to the nearby forest preserve and renovated building interiors.

The firm plans a similar renovation at the 103,471-square-foot fifth building and has a partnership with the Midtown Athletic Club location adjacent to the complex to offer discounted membership rates to tenants’ employees.

“They’re doing the right things to overcome some of the perception issues” that Bannockburn Lakes has built over time as an outdated office facility, said Jon Connor, vice president of the office advisory group at Colliers International, which helped sell the fifth building to Ameritus earlier this year. “It was a quiet park for a long time. GlenStar is doing the right things to help turn that perception around.”

GlenStar has been active in the Chicago office market in recent years. The company earlier this year bought the Schaumburg Corporate Center and previously redeveloped the 911,000-square-foot Continental Towers in Rolling Meadows.

In the city, GlenStar was part of a consortium that in 2012 bought two of the three buildings that make up the Chicago Board of Trade office complex at 141 W. Jackson Blvd. 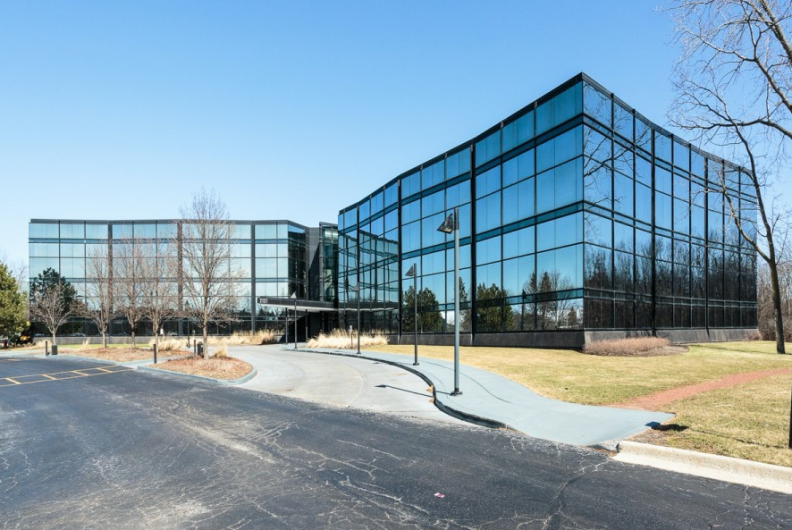