New York-based Angelo Gordon is adding a prominent piece of the O’Hare office market to its portfolio.

The sale of Presidents Plaza, an 835,000-square-foot, two-tower complex at 8600 and 8700 West Bryn Mawr Avenue, will bring in $148 million for sellers PGIM Real Estate and Chicago-based GlenStar Properties.

The joint venture that’s selling the property picked it up in 2006 for $129 million.

GlenStar will hold onto a minority stake in the buildings, according to Real Estate Alert, which first reported on the deal.

The sale price pencils out to $177 per square foot, according to Crain’s.

Office vacancy in the O’Hare market closed out last year at 16.4 percent, while it was 23.3 percent in the suburbs as a whole.

The occupancy at Presidents Plaza is 92 percent, but per JLL, which is marketing the available space, current rents are 13.1 percent below market rate.

Among the largest tenants are the headquarters of True Value Hardware and Property Casualty Insurers Association of America.

Angelo Gordon also has interests in industrial and self-storage properties around the Chicago area, as well as a stake in the Citadel Center at 131 South Dearborn Street in the Loop. [Crain’s] — Scott Klocksin 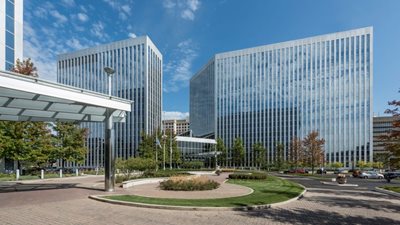