The high-rise office you left in March may not resemble the one you’re going back to. Here’s what workplaces may look like after the coronavirus shutdown.

Masked workers walk through an entrance-only door into the office high-rise, where their temperatures are taken while passing through security.

Lines form in lobbies as elevators bring small groups of workers — each facing a different wall — to their floors.

Touchless doors open into corporate offices, which have been reconfigured to limit close, face-to-face encounters.

Building extras like restaurants, if they’re open, only offer carry-out. Fitness centers and lounges are closed.

The offices that people will return to post-pandemic are a sharp contrast from the collaborative work spaces and amenity filled workplaces they walked out of in mid-March to begin working from home.

Indeed, Chicago’s return to the office is expected to usher in the most dramatic changes in big commercial buildings in nearly two decades. And new technologies are emerging to help make the return safer.

“Just like life after 9/11, when you saw all this security being added in buildings, you’ll see changes happen in our public environments because of the pandemic,” said Karl Heitman, president of Itasca-based Heitman Architects.

While Chicago’s biggest employers and property owners are drawing up plans and strategizing on best practices, they are doing so behind virtual closed doors.

Those decisions will impact 406,000 downtown office workers, according to World Business Chicago.

Arriving at a consensus may not be easy, since COVID-19 responses have largely been left up to city and state leaders. Locally, Mayor Lori Lightfoot last month announced the formation of the COVID-19 Recovery Taskforce, which she will co-chair with Sam Skinner, former President George H.W. Bush’s chief of staff.

The 2001 terrorist attacks and natural disasters provide some return-to-work precedents, but there has been no event that leaves behind a playbook for the aftermath of a pandemic that effectively shut down the global economy to all but the basics.

Willis Tower and Chase Tower are lit in red in downtown Chicago on May 2, 2020. (Chris Sweda/Chicago Tribune)

There’s also an unclear timeline for a vaccine, widespread testing or other medical breakthroughs that would clear the path to a full-fledged return of economic activity. Offices will be among the third phase of businesses to reopen in Illinois, with restrictions on capacity, according to a plan unveiled Tuesday by Gov. J.B. Pritzker.

“There just isn’t a standard of practice that employers can turn to and say ‘We’re doing what other employers are doing,’” said Dave Guilmette, president of health solutions for global consulting giant Aon, which advises clients on risk management, health policies and other workplace issues.

His firm is the anchor tenant in Chicago’s third-tallest skyscraper, which serves as Aon’s U.S. headquarters. Aon is talking with 20 of Chicago’s biggest employers, as well as building owners and local authorities, to establish a cohesive plan for the Chicago area, which is home to some of the world’s largest corporations, Guilmette said.

“You’re going to need to look to businesses to take the lead,” Guilmette said.

Real estate brokerages, architecture firms and firms are creating their own guidelines.

Ideas discussed include having everyone in an office walk in a clockwise or counterclockwise direction like one-way traffic on a road, moving desks so they don’t face one another, installing barriers between work stations and reducing crowds in highly populated areas like cafeterias and conference rooms. Employers also must decide whether masks or other face coverings will be mandatory.

Employer-provided meals and community refrigerators could be among the many casualties, at least initially, said Michelle Osburn, workplace practice leader and associate principal at architecture firm Perkins and Will.

“In the near term, it’s not about radical changes,” Osburn said. “It’s understanding protocols around things like food and beverage. What are we going to do about coffee?”

Early goals also will include making employees comfortable with their commutes and navigating tight areas such as elevators, she said.

Workers’ top concerns include office cleanliness, returning to public transportation and proximity of coworkers, according to a workplace survey of 110 North American companies by commercial real estate brokerage Jones Lang LaSalle. Among workers who typically take trains or buses to work, 28% said they will seek an alternate form of transportation when they return to the office, according to JLL.

How quickly workers regain trust in public transportation could have a lasting impact on commuting patterns, residential markets, and where companies ultimately choose to locate.

And the idea of only allowing four or five people in an elevator at a time could create a major bottleneck in the lobby of a skyscraper such as the 110-story Willis Tower, where 15,000 people work each day.

“A lot of big, high-rise office buildings are struggling with that,” said Michael Cornicelli, executive vice president of BOMA/Chicago, an association of 240 downtown buildings.

Chicago-based GlenStar Properties got its first look at elevator etiquette May 1, when workers returned to the Dallas-area office properties it owns.

There has been strong compliance to new rules, such as exterior doors designated for entrance or exit only, GlenStar co-founder and managing director Michael Klein said. Elevators are limited to four passengers, each facing a different direction marked on the floor, he said.

Texas’ return to the office has been a trial run for the eventual reopening of GlenStar’s buildings in Chicago, where it owns the Chicago Board of Trade Building and 55 East Monroe. GlenStar also owns Chicago office complexes near O’Hare International and in suburbs including Schaumburg and Rolling Meadows.

The re-entry process in Chicago could move slowly. Companies are expected to bring in a small percentage of workers initially, while staggering start and end times to further limit crowds.

While landlords and employers map out their plans, new technology is emerging to help them. One area where there’s keen interest is assessing who might be coming to work sick.

La Grange-based Dubak Electrical Group recently unveiled a system that allows as many as 40 employees’ temperatures to be taken simultaneously, using an entryway similar to a metal detector. Results are integrated into a facility’s security system.

A body temperature of employee Nicole Drougas is detected with DuThermX, a fully integrated body temperature measurement system at Dubak Electrical Group in LaGrange on May 4, 2020. (Zbigniew Bzdak / Chicago Tribune)

As groups of people walk through the entrance to a warehouse, office building, sports venue or airport security checkpoint, a high temperature sets off an alarm. The person with a fever can be pulled aside immediately, or the system can be used to alert building management, security, and the ill employee’s human resources department by email and text message.

Dubak’s system, DuThermX, which is patent pending, can quickly identify an office worker who already has a fever, but it doesn’t capture people who are asymptomatic, said Chief Operating Officer Nick Dubak.

Widespread temperature-taking already is emerging in food processing plants, distribution centers and warehouse settings. It would be new in corporate offices.

“This is the new normal,” Dubak said. “This cuts the anxiety of coming back to work, which is something we need to solve from a business perspective.”

The company already has 150 orders from Denver to the East Coast, Dubak said. Several systems already are in use in the Chicago area, Dubak said, but he declined to specify locations.

The family owned firm sped up the system’s development in January, when it became apparent the virus would have a major impact on the United States, Dubak said.

“I think this is a tool where we can start looking at the data and spotting trends,” he said. “You can use that data to enhance sanitation or take seasonal approaches to the unknown. Today we have COVID-19. What’s next tomorrow?”

Meanwhile, Zebra Technologies is developing a contact-tracing device that could ensure social-distancing policies are followed in the workplace.

The company already has equipped some of its own workers in research and development and warehouse facilities with devices that issue an alert when workers get too close. The device also would be able to track data on workers’ movements so that if an employee tested positive for COVID-19, the company could determine who may have been exposed, said Chief Financial Officer Olivier Leonetti.

The device, called Zebra MotionWorks Proximity, will be used primarily in distribution centers but has the potential to be used in offices and other workplaces, the company said.

Experts have mixed opinions on whether temperature checkpoints will become commonplace in Chicago. And using technology to closely monitor the flow of people in an office or more broadly through contact tracing is viewed as effective but also controversial.

“There’s a really important question about contact tracing that will need to be thought through,” Aon’s Guilmette said. “We know the technology works. We don’t have policy at the government level or the business level, and there are privacy issues associated with it.”

While navigating tricky ethical and legal issues, many corporations also are laying off workers, renegotiating leases and slashing other spending. It’s unclear how long the economy might take to recover.

With those conditions in mind, Chicago-based Big Construction recently circulated a pricing list for a wide ranges of office upgrades, ranging from automatically opening doors and hand-sanitizing stations to heftier projects like new air circulation systems.

“We’ve gotten more of a response than I expected,” CEO Tony Iannessa said. “A lot of clients are thinking about this and taking it very seriously.”

For office tenants, short-term changes can buy time to assess the long-term implications of COVID-19.

“Nobody knows what the future of the office looks like,” Iannessa said.

The pandemic threatens to reverse some office trends that have emerged in recent years, such as bench-style seating with workers in close proximity; the popularity of co-working spaces; and wide-open layouts with few private offices or barriers.

Time will tell whether the new realities might slow the migration of tenants to downtown Chicago from the suburbs, or the proliferation of high-end amenities open to all workers in an office tower.

“The tenant lounge, who’s going to that?” said Savills broker Joe Learner, who represents office tenants. “The fitness center, who’s going to that? All these amenities that were big attracters to those buildings, and that cost a lot of capital to create, those spaces are now challenged.”

“I think every company is certainly evaluating now, how does remote working fit into the overall business plan?” said Osburn at Perkins and Will. “It’s not really a one size fits all. Some people come in for collaboration and some come in to focus because they can’t focus at home.

“Every client is thinking about it, and even the ones who thought they had it figured out are rethinking it.”

“We’re trying not to knee-jerk react,” said GlenStar’s Klein. “I don’t think there will be extremes where everybody moves to the suburbs or everyone goes to private offices. Changes will be incremental. In the end, people want to be together.” 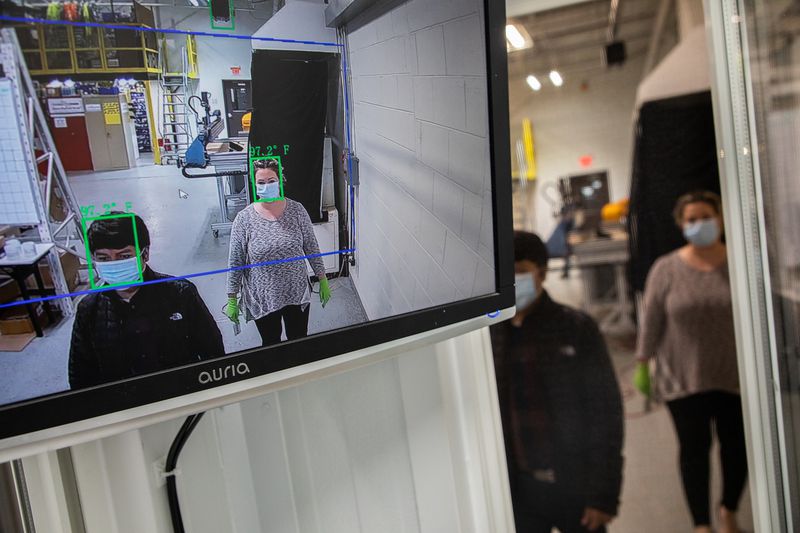